All our coaches are DBS checked.

My name is Ali and I have been coaching our youngest members ‘The Kittens’ since October 2018. I have been part of a netball club /team for the last fifteen years. I find the game so rewarding, not only at a fitness level but on a friendship level too! Through Netball, I have made some good lifelong friends, and I thoroughly enjoy my time training and taking part in games and tournaments.

As soon as my eldest daughter was old enough to join a club I signed her up with ‘Penketh Panthers’, not just because they are a local club but because they were recommended by my own fellow team mates. My daughter soon became part of our ‘family’ and now my youngest daughter has joined too.  I was asked to coach ‘The Kittens’ due to my netball background and thoroughly enjoy my time with the youngsters.

Seeing our youngest members develop into little players is so rewarding, not only for me but for the parents too. They come to us with little or no knowledge of the game and gradually, progress into playing matches each Sunday. Joining a club for the first time at such a young age is not easy but all our members are made to feel welcome and without encouragement ‘The Kittens’ take new members under their wings and make them feel part of our team. There is so much for them to learn from starting with the basics of throwing, catching, footwork and learning the court positions. I am so proud of how each week, through commitment they listen and learn the game of ‘Netball’ which has been a huge part of my life and of which I still enjoy playing.

Watching the delight on the faces of our players (and their parents) when they score a goal, in matches is fantastic! Our member’s embrace the game of netball and new friendships are formed which hopefully will see them rise through our teams into the adult world of Netball!

Our club’s motto truly is…… 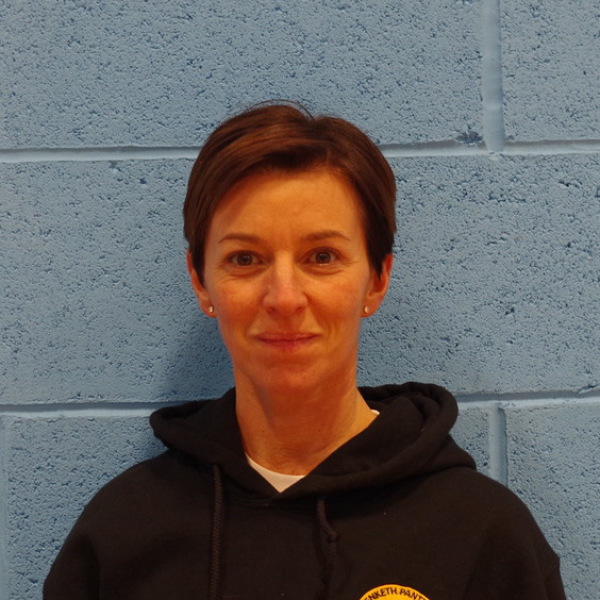 Hello my name is Jo and I’m the Penketh Panther Claws coach.  I have played netball since primary school and I still am, although I’m not as quick as I used to be!  I have a great passion for netball as it enables people with varied abilities to be able to come together, get fit and build lifelong friendships.

With my daughter coming along to watch me play matches she was quickly building up an interest for the sport and wanted to be able to play too.  I was aware my niece played locally and enjoyed the training sessions and games with the club, so I knew my daughter would feel at ease with her presence.  After a little chat we went along to a training session and since then we haven’t looked back.

With my netball background I was asked by the committee to become a coach of the younger girls and I achieved my level 2 coaching qualification last year.  Coaching the Claws is great!  I look forward to seeing the children and watching them develop life time skills that hopefully one day they will look back on and say “Jo taught me that!”. I became involved with the club when my daughter played a tournament in school and received an information flyer asking for new girls to join the Penketh Panthers. She went along to her first training session and hasn’t looked back since. Within a year, she had gone from a relatively new netball player to helping the Cubs team go on to win their division and get promoted.

I became a member of the adult’s team, the Penketh Pumas, playing with other mums and coaches on a Sunday evening. I loved the feeling of belonging in this team as everyone is so welcoming and no matter what your ability you are always made to feel like an integral part of the Penketh Panthers Netball Club. It also brought my daughter and I closer together as we would sit and watch each other play netball and cheer each other on.

Being part of this team made me feel even more welcome at the club than before so when 6 months later I was approached by the club and asked if I would be willing to coach the upcoming new Year 7 team, it was an easy decision to make.

From training, to the matches, I get to watch the girls in my team grow, succeed and challenge themselves to become fitter and stronger individuals. To see their determination each week to make themselves and their team mates proud, is fantastic.

To also watch them become close friends with each other outside of netball, at home and at school, is what this club is all about. This Club has a great sense of friendship and you can quite often see the older girls helping out with the younger ones which gives everyone a sense of family and belonging.

Both my daughter and I have really enjoyed our time as part of the Penketh Panthers Netball Club and hope to remain a part of it for many years to come. My name is Clair and I am the Founder Member of Penketh Panthers Netball Club. I founded the club in 2014 when I was looking for a club for my daughter, but I soon found that there was no provision for netball in the Penketh and Sankey area of Warrington. Along with other sports, I played netball at school and clubs as a child and I continued playing through into adult life. I became a fully qualified Physical Education teacher in 1996 and I have been teaching PE or coaching at the club ever since. I love the feeling of being part of a team that netball has given me which is what I wanted my daughter and the rest of the members of the club to experience.

My current responsibilities in Penketh Panthers are to coach the secondary school aged players along with Vic; we emphasise fitness and fairplay through our training sessions as much as developing netball skills. In addition, I manage the Panthers team for their Sunday matches. I have attended regular coaching officiating courses throughout my career and continue to do so for the benefit of all of our athletes.

I am so proud of what Penketh Panthers have achieved so far as a club, not just because of the progress of the teams but more importantly we have created lasting friendships in a wonderful netballing community where everyone is welcome. My name is Victoria and I am the Safeguarding Officer for Penketh Panthers. I became involved with the club when I was looking for a hobby for my two girls (now teenagers). I played netball at school and really enjoyed it, so I carried on playing through college and university. I made some of my ‘forever friends’ through the game, so I thought that netball would be perfect for my girls. They had tried all sorts of clubs and activities previously, but never really stuck at anything. The difference with the Panthers is that the emphasis is on friendship, fun, fitness and fairplay, and that makes such a difference.  My girls loved the training sessions, but they also made a whole new circle of friends out of school. I soon became more involved and started helping out at training sessions. I then began stepping in as a team coach and I am now responsible for the two older teams. It is really rewarding: I get a lot of out of it but most importantly, my daughters and I have found something that we all love and we can do together. Penketh Panthers is a great netball club that puts the players first and it’s a pleasure to be part of it.